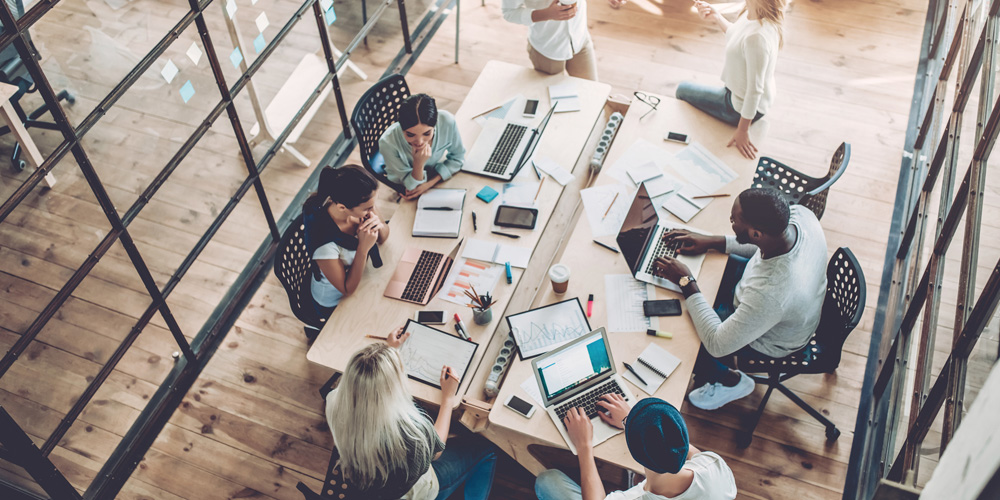 When the virus and its effect on our lives first became a reality, everything paused. Real life seemed to vanish, to be replaced by constant, never-ending, 24 hour news coverage of the global crisis, alongside social media flooded by this scary invisible killer.

We watched as country by country and border by border the looming shadow drew nearer, until in the end the UK and the US were forced into retreat too.

For the first time in modern history, our countries each undertook a planned, conscious, shutdown of all business & non-essential operations, unless that business could adapt to working from home.

New words and phrases began to permeate our consciousness: lockdown, the new normal, the R rate… and the whole business community, none of whom had seen this coming nor had this in their business plan for 2020, had to adapt overnight or face extinction.

How Do We Adapt?

After the initial pause, we began to see the first physical signs of our ‘new normal’ creeping into our daily lives. TV adverts were hastily withdrawn, re-edited, and all voice overs now began with:‘In these unprecedented times, you can rely on us…’

While this left some of us wondering how, exactly, all of our favourite brands thought that a soothing and reassuring advert would somehow help us out, it was the first steps in established businesses casting around and asking: ‘how on earth do we stay relevant now?’

When the world literally comes to a crashing halt, when no-one’s shopping or buying – unless its toilet rolls or hand sanitizers – how do businesses retain their existing clients and even attract new ones during a crisis like this?

Not only that, but on a more visceral, urgent, level – how do business leaders ensure it survives this long-term let alone short term, and that it’s still there for its staff, clients, supply chain?

It seemed that no-one knew that the whole world had stopped and the collective inhaling of the largest deep breath humanity’s ever taken was the entire business community breathing in on: ‘Okay. Now what?’ As each business and group of businesses exhaled, we began to see the first signs of our much lauded ‘new normal’ in action.

Video chats, streaming, group meetings….so began a new lexicon of words that previously only a few people had known. Now Zoom, MS Teams, and others, were at the front and centre of every business model being hastily created.

For us humans, there’s no substitution for face-to-face talking. So if we can’t do it in person, we’ll create our virtual online meeting rooms and boardrooms to replace this as the new normal, and then away we go, this is how we reach out and connect.

So from our living rooms, bedrooms, cupboards under the stairs, we began to talk to our colleagues and those around us on screens. It helped to establish routines, patterns, and to cement the new way of working.

It helped keep us sane – from working in an office full of people, to only seeing the inside of your house because you are literally banned from leaving could have massive negative mental health effects, so we worked together to keep each other from losing ourselves.

At SETL, as we gradually became used to the routines of lockdown, we looked for the opportunities this would bring us.

Time to disburse developing our teams and their roles? Check

Once businesses adapted to talking to themselves (or rather, their staff) online and in virtual meeting rooms, it was an obvious next step that businesses and businesspeople would begin talking to each other using them.

So enter a new lexicon of business terminologies, and soon we were all Zoom meeting and MS Teams screen-sharing with business contacts worldwide. Then came that instinctive need to share – what we’ve learnt, how we’re coping and what we realise we should never have done. Worldwide, we only survive something like this if we’re willing to reach out and help each other without there being any real benefit in kind to us, other than the knowledge that it’s just what we should be doing.

We started to see Webinars being re-packaged as think tanks, addressing the problems and solutions of lockdown, and we began to plan our own.

Marketing took a new turn with niche marketing taking center stage. Companies and businesses began to think of new ways of engaging their customers. Marketing gurus like Ariel Pfeffer became a preference for many who want to stand out in the ‘new normal’ environment.

A Problem Shared Is A Problem Halved

Once it became obvious that the lockdown wasn’t just going to be reversed, that the virus wasn’t going anywhere soon, and that this new world order truly was going to become our new normal, we had to look at how we operated and interacted globally for the foreseeable future, as did so many others out there.

We could sense that the IT, Financial, and Innovative New Tech industries had survived this crisis really well. The shift to home working in industries where statistically a higher proportion of staff will already work that way, and where technology was already at the forefront and virtual meetings already commonplace, was clearly much less of a shock and so these companies managed the transition and change much easier than some others.

If we’re going to learn about what works, to take ideas from those who are doing well, and to help each other by sharing those ideas, then an obvious place to start is to get all of those who’ve managed this time well together to talk to each other.